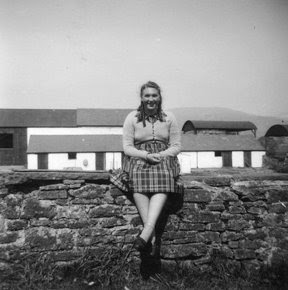 After Mari and I left Craig-y-nos our mothers kept in contact and Mari came to stay with me on the farm, Ty-Llangenny, near Crickhowell.
Posted by Ann Shaw at Friday, February 27, 2009 No comments:

Who is this girl? 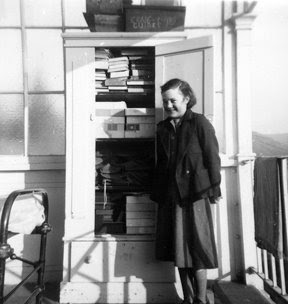 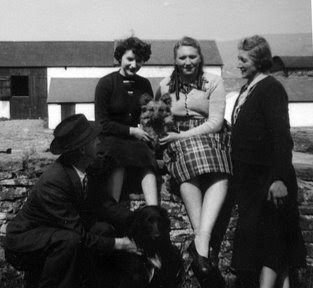 Trawling through my album I came across some photos taken on the farm shortly after leaving Craig-y-nos. This is one with Mari Friend ( nee Jenkins), her father and my mother.

I am holding Bonnie the corgi my mother bought for me to come home.
Posted by Ann Shaw at Monday, February 23, 2009 No comments:

This should stir some memories!

Yet another photo from Mari Friend (nee Jenkins) vast collection. Miss Thomas ( teacher) is second from left followed by Jean Shakeshaft and Mari.

In the front row (right) is Barbara O' Connell ( Paines). We don't know the names of the other two girls.
Posted by Ann Shaw at Monday, February 23, 2009 No comments: 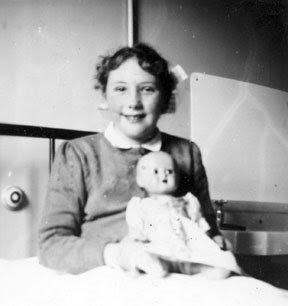 Mari's son, Chris, emailed me this photo of her in Craig-y-nos which she has just found. It's amazing how, more than two years after this project started, photos are still coming in.


Thank you one and all!

Former nurse's story of her time in Craig-y-nos 1955 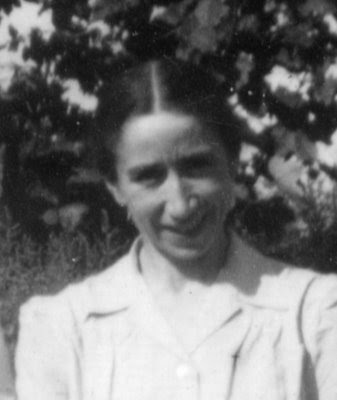 Brian Jones sent in this account from the South Wales Voice of his mother who worked at Craig-y-nos. It offers a fascinating insight into life there from the perspective of a part-time member of staff"

What it is like to be a part-time nurse

I live quite near Craig-y-nos, the former home of the famous soprano, Adelina Patti, which has now been converted into a chest hospital for children and adult women. After hearing a broadcast appeal for part-time helpers, and having several free hours every day when my husband was at work and my children at school, I applied for a position and was accepted. No previous nursing experience was necessary so I would begin as a very raw recruit, knowing nothing about hospitals except the little I had observed during the short period I had spent in one as a patient - only two weeks to be exact,

Early the next Monday morning, after I had seen my children off to school, I went to the hospital to start my new work. I was taken to the sewing room and issued with a very starchy uniform and a small round cap which reminded me of Mrs Beeton. It took me some time to master the art of getting into this uniform but eventually I was dressed and ready to become Florence Nightingale's most fervent follower.

I was assigned to Ward 4, a new building, modern in style, which was built after Craig-y-nos had been converted from a country house into a hospital. The ward was bright and cheerful with large windows overlooking the lawns and the river Tawe which, in dry weather, was a mere trickle but in the rainy season deverloped into a raging brown torrent, the roar of which could be heard clearly in the wards.

It was all quite strange and confusing at first, and I had great difficulty in remembering the names of the twentyfour patients. Most of these were young girls but there were also several young married women. They were all very charming and friendly and their gaiety and courage filled me with admiration. Their humour was all the more astonishing because many of them had to spend months, even years, away from their homes and children. They hardly ever grumbled and only an occasional one or two became depressed. Indeed, their cheerfulness was so infectious that they often cheered me up and made me see the lighter side of my several small troubles.

I soon became accustomed to the unchanging routine of the ward, Every morning, the sweeping and dusting had to be done, beds made, flowers brought in from the bathroom where they were kept overnight, and everything tidied up in readiness for the doctors' daily visits. At ten o'clock the patients had what I think was meant to be "elevenses" but which was called "lunch".

After we had given this out and collected the cups we got down to the serious business of blanket-bathing the bed-patients. This was very popular as it gave us a good excuse for having a nice long chat. Esconsed in screens, we discussed everything under the sun - books, films, fashion, radio programmes and our respective families. We soon knew all about each other and our children. My son's progress at school created enormous interest and, when he passed an exam, he had a lovely surprise when a congratulatory telegram arrived, sent by the patients of the entire ward.

Some of the other jobs I had to do were filling hot-water bottles, helping to serve meals, washing combs and brushes, tidying lockers, changing library books and, of course, there was the inevitable bed-making.

I have been at Craig-y-nos for seven years now. They have slipped past with what seems incredible speed. I have seen hundreds of patients come in ill and go home cured. It gives me great satisfaction to know that I, in my humble and insignificant way, have helped to nurse so many of them back to health. I often think of them, and I know they think of me, too, because every Christmas, the largest number of my greeting cards come from ex-patients of Adelina Patti Hospital.

At last we have got a firm date for the book launch. It will take place on Friday May 1st in Craig-y-nos Castle.


More details to follow but it will follow roughly the same pattern as the highly successful Reunion - folk will ring up the castle and book themselves in for the lunch/book launch.
Posted by Ann Shaw at Monday, February 02, 2009 No comments: