" I am so pleased to hear that Gwyneth recovered and
went on to become a doctor. She was such a
lovely gentle girl.

I did not achieve any thing so grand.

Some years after I recovered my mother passed
away and I looked after my father and brother and sister for years.

Traditional role of unmarried daughter
Frances, your story is that of so many young women in Wales where it was expected that the daughter would give up her life to look after elderly relatives.
When the family trawled around relatives to care for my 80 year old grandmother living on an isolated Welsh hill farm my name came up (" Ann is not married...she can do it").
I resisted the pressure though on at least two other occasions when an emergency call came to return to help out on the family farm I did succumb, giving up my job and flat in London to return to Wales.

Only last week I heard of a friend's aunt, now in her late 70's, who said her life stopped at 34 years of age when she left her secretarial job in London to return to the family farm to care for her ageing parents.
Posted by Ann Shaw at Saturday, October 24, 2009 No comments:

She is the only one, to my knowledge, to have come forward who spent most of her time inside Ward 2. ( This is curious because most of the children, around 15-18, were in fact inside the ward with only 6-8 girls on the balcony. )

The girls called me Percy because my maiden name was Frances Purcell.

I would love to hear from anyone remembers me or would like to write to me?

If so, you are very welcome to write to me at my email address: francis.heenan@ntlworld.co.uk

I very much look forward to hearing from any of you.

I was mostly in the ward but was on the balcony for some months. It was winter and so very cold, a hot water bottle froze in one of the girls' beds. 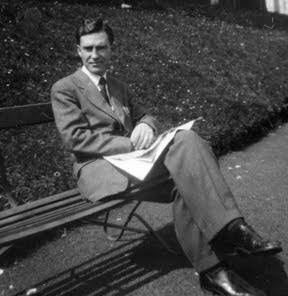 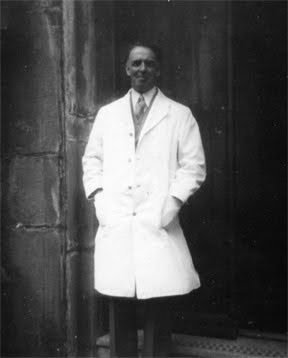 I wonder if Dr Mullhall is still with us? ( Yes he is still alive and living near Brecon - Ann)
Both he and Dr.Williams were loved by all the girls. After their rounds we would all say who we liked the best, a bit naughty for girls so young. 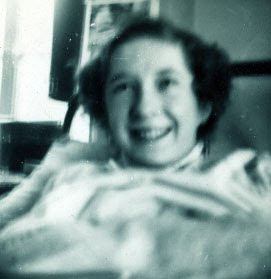 Gwyneth Davies suffered from asthma and Dr Huppert put her out on the balcony during a foggy spell in the hope that it would cure her. She had a severe attack one night . Even as a young girl Gwyneth wanted to be a doctor and she became one .

"I remember the Christian names of some of the girls on the ward; there was Brenda with short dark hair, Ann Norris who was there before I arrived, Gwyneth a lovely girl with long brown hair, who had severe asthma, Marilyn who was told her mother had died, someone pulled the curtains around her and left her to cry. There was a girl with lovely red hair from Swansea, I can't remember her name. Her parents gave her a big doll. "


"The Children of Craig-y-nos" by Ann Shaw and Carole Reeves is published by the Wellcome Trust Centre for the History
of Medicine, UCL , price £9.99 and is available from Waterstones and most major bookshops or from Amazon online.
Posted by Ann Shaw at Sunday, October 18, 2009 No comments:

"The Children of Craig-y-nos" - book

It is good to hear "The Children of Craig-y-nos" is selling in Wales.

many people who were either patients or nursing staff never knew but we live so near sister williams we never seen her before or since that day."
Posted by Ann Shaw at Tuesday, October 13, 2009 No comments: 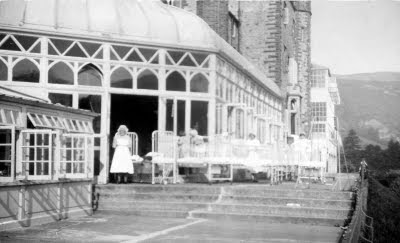 Glass conservatory for the babies and small children


And still the "children of Craig-y-nos" are coming forward in search of their missing past.


Only the other day I received this very moving email from Raymond O'Connor in Lincolnshire:

" I was one of those children at Craig-y-nos along with my sister Eileen and my mother Bertha Kathlyn Mary O'Connor nee Davies who died on 30th September 1943 at Craigynos.

Her death certificate was signed by G. Richards M.B. (cause of death tuberculosis).

As I was just 5 year old when my mother died and my sister Eileen was 3, do you have any records as to when my sister and myself were released after my mother's death?


I do have 2 photographs; the first one is with my parents at the age of approximately 18 mon.ths, and the second one is my mother, my sister and myself just before she went into Craig-y-nos.


My father was away in the war.

Incidentally, I just received a copy of your book from my aunt in Swansea as a birthday
present. I will be 71 on the 1st of October and my sister Eileen will be 69 on 20th Nov.
The full story about our childhood and our adult life and the way everything affected us is
a very, very sad story."


Raymond added:
" To this day I still have dreams of the glass conservatory. I now live in Lincolnshire."

I have to tell Raymond that all records were destroyed - that's why we tried to piece together 40 years of missing Welsh history in our book The Children of Craig-y-nos available online from Amazon or your local Waterstones.
Posted by Ann Shaw at Sunday, October 11, 2009 No comments:

Just heard that a friend finally managed to get a copy of "The Children of Craig-y-nos" from Waterstone's Abergavenny though he placed an order several weeks ago.

I tell people it is quicker to get it online from Amazon
Posted by Ann Shaw at Wednesday, October 07, 2009 No comments: 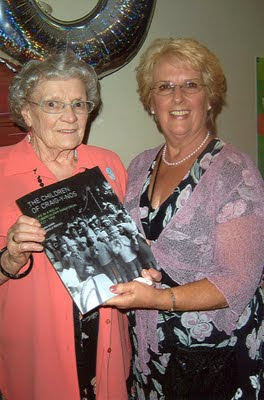 Susan, a former child patient in Craig-y-nos in the early 1950s had a double surprise the other day.

For her family gave her a surprise 70th birthday party and retired nurse Valerie Brent, the star guest presented Susan with a copy of "The Children of Craig-y-nos".

Valerie says:" Susan was unable to make the book launch but she did come to the reunion the year before. She hadn't been able to get hold of a copy of the book so I got her one and gave it to he. She was absolutely delighted."

Comment
Frances Purcell said...
I could not make the Exhibition.

The girls called me Percy because my Maiden name was Frances Purcell.

I would love to hear from anyone remembers me or would like to write to me? If so. you are very welcome to write to me at my email address: francis.heenan@ntlworld.co.uk

I very much look forward to hearing from any of you.