Girls on the balcony of Craig-y-nos Castle. Mari is in the middle of the back row and Ann ( Shaw nee Rumsey) is on the far right.

Many of you will remember Mari Friend ( nee Jenkins) so it was with great sadness that I received this email from her son Chris:

Hi Ann ,
I regret to inform you that my mum, Mari Friend, passed away last Sunday (July 25th). As you know she was suffering from Bronchiolitis and Rheumatoid Arthritis for many years and had fought these two conditions bravely.

Unfortunately in the last few months she was diagnosed with lymphoma and her chest were not able to stand any treatment.

The last two weeks saw a rapid deterioration especially the last three days.
She died peacefully on a hospital ward where she was well known and treated as family.
I'm sorry to pass on this news with an e-mail but we're unable to find a number for you.
Chris" 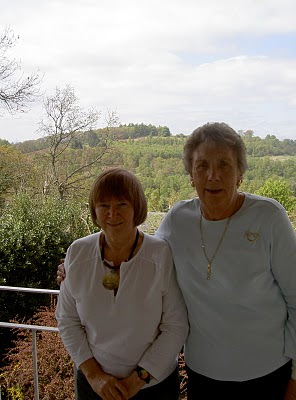 And 50 years later.... Ann and Mari on the balcony of Ann's home Bridge of Allan, Scotland overlooking the mountains to the north..

Mari and I shared some time together in Craig-y-nos in the early 1950’s and even after she left we kept in contact for a number of years. She came on holiday to our farm Ty-Llangenny , outside Crickhowell and I stayed in Ynysygwas, Cwmavon.
Later we shared the same hostel accommodation, Bourne and Hollingsworth in Gower St where Mari worked as a sales assistant, and I had a job as a secretary to a publishing house in Russell Square.

After that our paths separated: I went off to work in Switzerland and Iceland and Mari got married.
We met up again a few years ago on the Craig-y-nos project following a request I put in the local paper “ The South Wales Evening Post” asking for the “ lost children of Craig-y-nos”.
Mari came forward and that is when we discovered that Mari had this amazing collection of photographs from her time and her sister’s time in Craig-y-nos .

This collection formed a substantial part of our book “The Children of Craig-y-nos” which I co-authored with Dr Carole Reeves, Outreach Historian with The Wellcome Trust Centre for the History of Medicine.
I am deeply grateful to Mari for her contribution. She was always such a cheerful character both as a child and in her later years even though suffering from poor health.

Mari will be sadly missed.
Posted by Ann Shaw at Thursday, July 29, 2010 No comments: