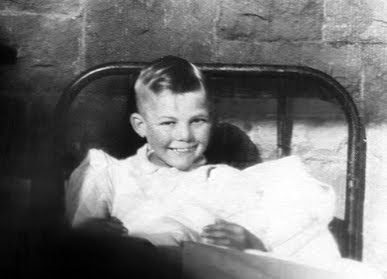 
I have just received the following email from Gillian Beynon:


"I thought I should tell you you that my dear father- in- law passed away during the early hours on 16 July rather suddenly - he was 84 and had been enjoying our son's birthday only hours before his passing.

I would like to thank you on behalf of all our family for including him in your book and for the enjoyment he took in the reunions and helping you to gather information to put your findings in print.

The book is remarkable thanks to the testimonies of people like my father in law and many others and you have done them proud by setting the record straight and producing a book to be proud of and be of interest to many for years to come.

His experiences like others will live on in print and the book is a marvellous keepsake for us all."

Extract from "The Children of Craig-y-nos", Haydn's story:

"My bed was on the balcony and I can remember sitting up in bed with pyjamas on and my mother and father with overcoats and scarves and hats on, the snow and the rain coming in, and they'd be shivering. It was cold but you didn't feel it after a while.

...You were given four squares of Cadbury's chocolate, and I didn't qualify because if you didn't eat your afters, you couldn't have chocolate. I can remember vividly...every few days the curtains would go around a bed and porters would wheel somebody away who had died. I was only a youngster but it seemed that there were lots of people dying at that time, like every other day.

Craig-y-nos was monotonous, one day after the other. The difference between Highland Moors, where I went in 1932, and Craig-y-nos is that there you were encouraged to play."

"The Children of Craig-y-nos" by Ann Shaw and Carole Reeves, published by the Wellcome Trust Centre for the History of Medicine, UCL, price £9.99p is available online Amazon.co.uk or from any good bookshop, Brecon museum, Val's newsagent in Ystradgynalais and through the Welsh Book Council.
Posted by Ann Shaw at Saturday, August 22, 2009 No comments: 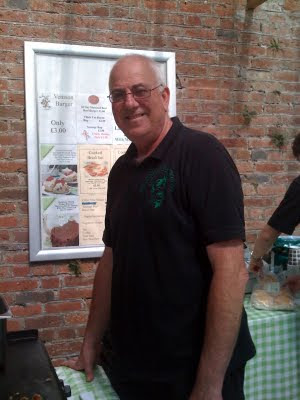 Paul Brandon outside the former gardeners shed in Craig-y-nos

Last week while in Wales I met Paul Brandon in Craig-y-nos.
He runs a specialist food company called Unusualfoods based in Ystalyfera and he also has a tearoom out of the former gardener's shed in Craig-y-nos Castle.

Now that brought back memories! for that was the place that we "balcony girls" from Ward 2 used to go and sit and talk to the gardeners while all the time Sister Morgan and Dr Hubbard thought we were walking around the grounds filling our lungs with fresh air. Instead we were ensconced in a warm smoky fug sharing tea and biscuits with the men.

Paul tells me that many ex-patients come into his cafe for refreshments and since they heard about the book
"The Children of Craig-y-nos" they want to buy a copy.

" I don't know what to tell them because we don't sell books, neither do I know where they can get a copy from. But there is clearly a demand for it and I would be happy to stock it if I could find it."

From next February Paul will be opening a much bigger tearoom and Welsh Craft Centre within the Craig-y-nos Country Park Visitors Centre and he will be stocking books there.

Meanwhile I have put Paul in touch with some suppliers who may be prepared to let him have some copies as a "one-off" until his new premises are up and running.
Posted by Ann Shaw at Tuesday, August 18, 2009 No comments:

Dafydd Jones of the Welsh Book Council tells me that they will be stocking"The Children of Craig-y-nos"" so museums and shops specialising in Welsh literature and crafts will in future be able to order direct from them.

The glitch seems to have been over the fact that the book is "print-on-demand" and wholesalers are still trying to figure out a business role model for dealing with it.

The book is, of course, available online from Amazon.co.uk, price £9.99 or from any good bookseller.

Comment:
Delyth Morgans said...
Thank you for your cooperation with the Welsh Books Council. The book is now available on
www.gwales.com
Posted by Ann Shaw at Tuesday, August 18, 2009 1 comment:

Brecon museum and "The Children of Craig-y-nos" 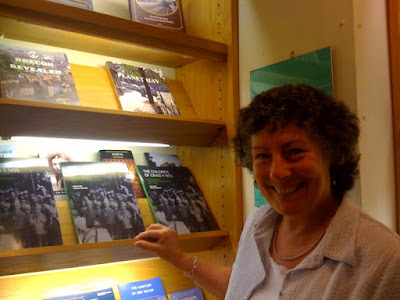 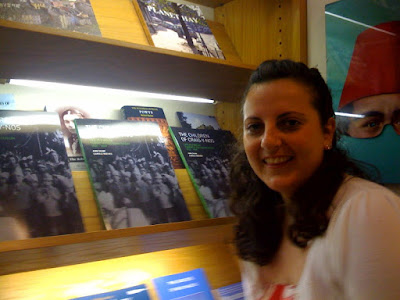 Brecon museum: Caroline Gorman (top) and Helen Weeks with copies of "The Children of Craig-y-nos"

Call in to Brecon museum to see how "The Children of Craig-y-nos" is selling and am horrified to find that the museum have not been able to obtain copies from the Welsh Book Council though we had been assured they would have it. Neither is it available from their on-line site.

Fortunately I had a couple of copies with me so I was able to let the museum have them.

The demand for the book followed a review in the Brecon and Radnor Express some weeks ago.
Posted by Ann Shaw at Monday, August 17, 2009 No comments:

"Children of Craig-y-nos" - Surrey and Glasgow

It's Mary Davies who was in Craigynos as a toddler.

" I am ringing to say I have just bought the book ( I ordered it through my local bookshop) and I would like to say how pleased I am with it."

A friend rang from Glasgow also rings to say she loaned her copy of the book to a Glasgow doctor who was one of the "balcony boys" in the days when sanatoriums ringed the city.

He too is fascinated by the Craig-y-nos story.
Posted by Ann Shaw at Monday, August 17, 2009 No comments: 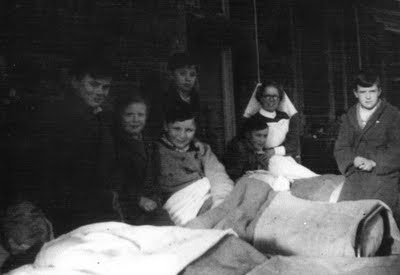 Gerwyn Davies and other boys on the balcony , 1945

Book launch of The Children of Craig-y-nos
Cerwyn Davies brought along some photos , including this one, to the book launch/reunion and he says he found it a "memorable and very poignant occasion".

Cerwyn tells me that one big memory that stands out from his time in Craig-y-nos Castle is the occasion that:

"My uncle brought me in some records for the gramophone and I threw them like flying saucers over the balcony into the bushes. One of the gardeners reported me and I got put in a straitjacket."

He had an older brother who used to come along to the castle for the monthly visiting but had to stand out in the courtyard or go to the cafe opposite and his brother remembers an outside lavatory with a photograph of Adelina Patti in it.

" I gave my brother a copy of "The Children of Craig-y-nos" to read and he got very upset. I told him "You weren't the one in there having tubes pushed down your throat or tied up in straitjackets!"

But my brother says it brought back all the memories of those days."
Posted by Ann Shaw at Friday, August 14, 2009 No comments: 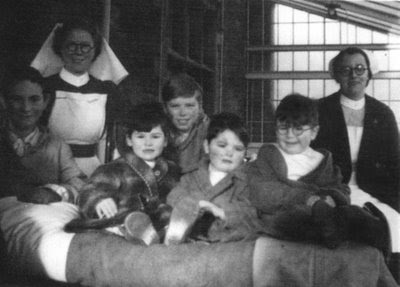 Roy Harry rings to tell me he is the boy wearing glasses. He had never seen this photo before so I am putting him in touch with Gerwyn Davies who sent the photo in.
Posted by Ann Shaw at Monday, August 03, 2009 No comments: