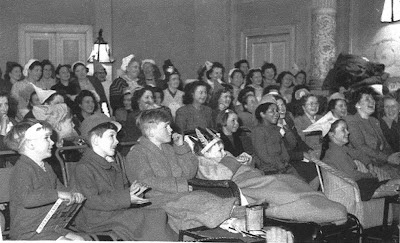 Children at pantomine in the Adelina Patti theatre

I received this letter the other day from Brian Collins who lives in Glasbury-on-Wye, near Hereford: " I was there for twelve months as an eight year-old before being transferred to Highland Moors in Llandrindrod Wells. Reading your book brought back many memories, some sad, some happy, some angry, some frustrating.

I have a couple of memories you might like to hear about. on my first day in the castle I was given a bed-pan to use. Having never seen, let alone used, one before I placed it on the floor to use. The onlooking boys thought this very amusing and made real fun of me. Not the best first impression! It was interesting to note tht other patients had vivid memories of the infamous Dr Hubbard!

Two stand out in my mind. As my mother had died of TB I was visited once a month by my Auntie Sal who, on one occasion, brought along a gift of a "pop" gun. For some reason this was confiscated by Dr Hubbard. When it was returned eventually by a nurse I was devastated to find that the cork had been eaten by a mouse and it no longer 'popped'. On the day of my transfer to Highland Moor by Dr Hubbard she stopped the car for a meal at the Cafe Royal in Brecon leaving me alone in the car! I also remember being placed in "restraints"to tie me to the bed. I found I could wriggle out of the four ties so they would put me in the 8 ties- one each side of the bed and two to the back of the bed. I could not turn over. It was to stop me getting out of bed. That ws Dr Hubbard again. I don't think that would happen now."

"The Children of Craig-y-nos" by Ann Shaw and Carole Reeves published by the Wellcome Trust Centre for the History of Medicine, price £9.99p available from Amazon.co.uk
Posted by Ann Shaw at Saturday, July 21, 2012 No comments: 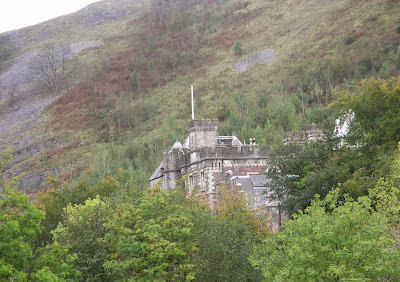 Craig-y-nos Castle, viewed from the lake.

I have just had a long chat with Hungarian filmmaker Tamas Tatai about his project. He is interested in making a film about our book, “The Children of Craig-y-nos”, * based on Craig-y-nos Castle, a children’s sanatorium in mid-Wales, documenting forty years of lost Welsh history. The book is with a screenwriter who is also fascinated by the account of how children were removed from their parents and “imprisoned” in a castle for years on end. It was done on health grounds based on the same principle of treatment for leprosy i.e. remove the infected person from the community and isolate them in remote areas.

I was one of them.

Children have endless capacity for adapting and we did not think it in any way abnormal that we slept outside on open balconies in winter with beds covered in tarpaulin to protect us from rain and snow.

*The Children of Craig-y-nos” by Ann Shaw and Carole Reeves, published by the Wellcome Trust Centre for the History of Medicine at UCL, price £9.99p. Available from Amazon.
Posted by Ann Shaw at Monday, July 09, 2012 No comments: