Just heard that our book, "The Children of Craig-y-nos" has been shortlisted for the annual medical journalists book award.
We will know on April 27th at a reception in London if it has been successful.

Still, I am more than pleased to get on the short-list.
Posted by Ann Shaw at Wednesday, March 31, 2010 No comments:

Dr Carole Reeves of The Wellcome Trust Centre for the Hisotry of Medicine, UCL tells me that her talk yesterday reduced some people to tears!
And she has been asked to do one again at the Royal Free Hospital to the infectious diseases group.

She says: "The hospital sees lots of patients with TB, which as you may know, is a serious problem now in London."

And we all think this is a disease of the past.
Posted by Ann Shaw at Thursday, March 25, 2010 No comments:

Dr Carole Reeves, my co-author of "The Children of Craig-y-nos" will be talking this afternoon at a seminar on World TB Day organised by University College of London.
Carole, Outreach Historian with The Wellcome Trust Centre for the History of Medicine was instrumental in helping to get the book written and published, the culmination of a two year community based project.
Posted by Ann Shaw at Wednesday, March 24, 2010 No comments:

Caroline Boyce , ex child patient and neighbour of mine in Scotland, wrote an article in the Oldie magazine about her childhood experiences in Craig-y-nos and she has just received the following email from Joyce Fleming in New Zealand whose late husband was a patient there in the 1930's.

"I believe this was the same place in which my late husband spent his childhood from the age of 5 to 12 because of TB hip problems, around 1930-37".


If you were there, or had a relative who was there and would like to contact Joyce then I am sure she would love to hear from you.
Her email addredss is: joycef@xtra.co.nz
Posted by Ann Shaw at Sunday, March 21, 2010 No comments: 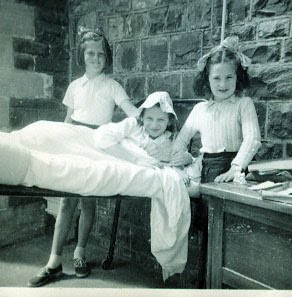 (from left to right) Mary, Ann and Caroline on the balcony of Craig-y-nos Castle

I was surprised at the public interest in the six photos I showed from the "Children of Craig-y-nos" project in my recent exhibition in Scion House- Stirling University Innovation Park. I only put them in as an after thought ( Malcolm's suggestion). I didnt think anybody would be interested because the work is so deeply rooted in Wales and Welsh medical history.

But I was wrong. Everyone I spoke to who looked at them were able to tell me of their own personal stories , dark tales from the past where they had relatives who had this disease that was not spoken about.
Posted by Ann Shaw at Tuesday, March 16, 2010 No comments: