Mary Davies- how the internet reunited the "lost children" 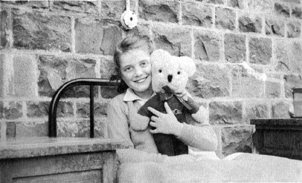 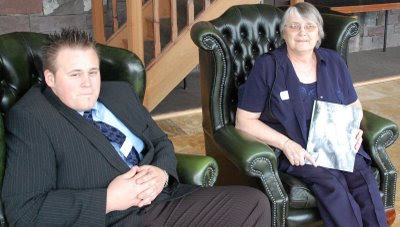 Mary Davies ( nee Morris) with her grandson, Stephen, at the book launch of "The Children of Craig-y-nos".

Often it was the children and grandchildren of the original "children of Craig-y-nos" that made the initial contact with me like Stephen (above). This is his original email on behalf of his grandmother:


"I was in Craig-y-nos in 1951. The photo shows me holding a teddy bear taken in September it was a present from my family for my 9th birthday in August. I don’t remember much about my stay only that I was out on the balcony and when I was rainy and windy they had to put tarpaulin on top of the bed to stop it getting wet. While in Craig-Y-Nos I made 3 good friends one was called Mary Jones one Jeanette Wakeham but I cannot recall the name of the 3rd one, we had a photograph taken but I can’t find it but will keep looking for it, and post it up on here when I do. I also remember doing lessons much to my disgust!

When I had a bungalow built I named it Craig-y-nos after my experience of the real Craig-Y-Nos.

I have been married for 46 years have 3 children and 4 grandchildren. The thing that sticks out in my mind was my parents were only allowed to see me one weekend a month. They only came one day as it was to far to travel as we lived in Rhayader in Mid Wales."


Mary still lives in Rhayader and, at our first official reunion two years ago, she was the first to arrive having driven alone for over two hours through the mountains.

This video clip captures her emotions on that momentous day:
Mary Davies


"The Children of Craig-y-nos" by Ann Shaw and Carole Reeves, paperback price £9.99., available from Brecon museum, Amazon.co.uk or most good bookshops.
Posted by Ann Shaw at Monday, June 29, 2009 No comments: 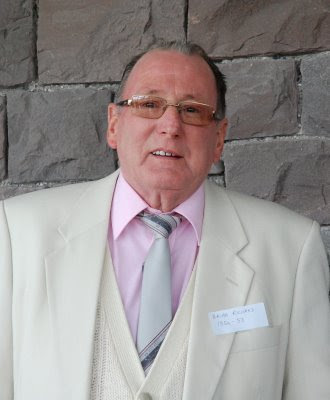 Brian Richards travelled all the way from his home in Bournemouth to attend the book launch of " The Children of Craig-y-nos".

Now a retired baker, he was in Craig-y-nos along with his two brothers.

Ellis Thomas and "The Children of Craig-y-nos"

Both Carole Reeves and myself have received letters from Ellis Thomas regarding the book: "Children of Craig-y-nos":

"Have just received my copy of the book. What a marvellous production! I was
taking a first flick through it when Ann rang, asking if I'd received it!
The book I find absorbing, to be read and re-read. I thank you and Ann most
sincerely for creating something which I never thought I'd see in my time -
and all through an enquiry on the correspondence page of the local paper!"

Thank you Ellis. It is always good to have feedback.
Posted by Ann Shaw at Saturday, June 20, 2009 No comments:

Margaret Madock- at the book launch 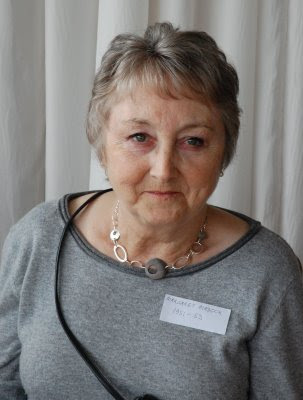 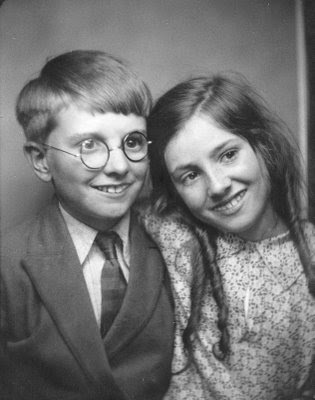 Gwanwyn Evans with her brother

"I am reading "The Children of Craig-y-nos"" and I have got to page 91...it is most interesting...do you know that I think it was Nan Davies* who took my place singing in the concert. The dates are not quite correct but it is such a long time ago... I had the best voice in the ward and I was so looking forward to it. My mother had sent me in a special frock to wear and a nurse had put my hair in rags the night before so that I would have ringlets.

Then I woke up with a temperature and I had to stay in bed. I think it was the excitement. But I was so disappointed!"


Eighty-eight year old Gwanwyn, who lives in Aberyscir near Brecon, had hoped to come to the book launch and had paid her deposit but she couldnt find anyone to bring her.
"Afterwards Glynne Lowe rang me up. We have known each other for years and neither of us knew that the other had spent years of our childhood in Craig-y-nos."
If I had known I would have got a lift with Glynne."

I mention my cousin, Edna Walters, who farms near Brecon.
" Of course I know Edna! " says Gwanwyn.
"She came to the book launch too."
"If only I had known..."
"She would have been delighted to have given you a lift."

Her husband Glynne Evans, former vice-chair of Powys Area Health Hospital is also reading the book with particular interest for he was involved in the decision to move the children to Talgarth.


*Nan Davies
Her story is on page 16 of the book- how the ghost of Adelina Patti tapped her on the shoulder and told her she would go out and sing the best she had ever done.

"The Children of Craig-y-nos", by Ann Shaw and Carole Reeves, price £9.99, is available from Brecon museum. It can also be ordered from any bookshop or online from Amazon.co.uk
Or contact Dr Carole Reeves, The Wellcome Trust Centre for the History of Medicine, UCL, 183 Euston Rd., London, NW1 2BE. Phone: 02076 798 135.
Posted by Ann Shaw at Tuesday, June 16, 2009 No comments:

Gareth Wyke at the book launch 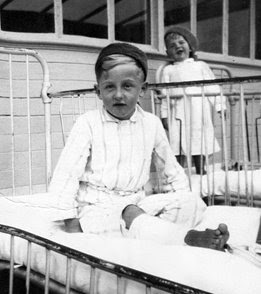 Gareth Wyke as a child in Craig-y-nos... 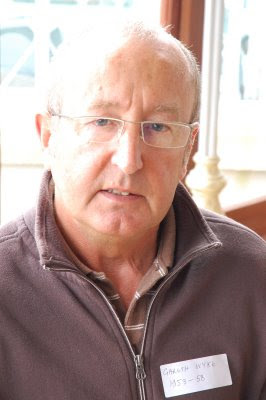 ...returning as an adult

Gareth Wyke travelled all the way from Stourbridge in the West Midlands to attend the book launch of "The Children of Craig-y-nos".

"I think my time in hospital definitely effected the person I was to
become.I relate to words and phrases such as ones you mentioned, like'lost
childhood','loner','self reliant','independant' and could also add
'anti-social[sometimes]','unloved',and 'persecution complex'.
When I arrived home I had a new sister I'd never seen before and she used
to cry and say I wasn't her brother.
However,despite having 'matchstick legs' and being teased by new classmates
I made a full recovery becoming a PE teacher and playing rugby until I was
fifty."

There are two wholesalers who will be able to supply the book. These are
www.bertrams.com and www.gardners.com 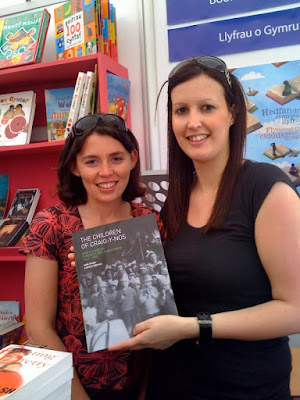 Emma Davies (left) and Emma Evans of the Welsh Book Council at the Hay Book Festival.

They are holding a copy of "The Children of Craig-y-nos" . The Welsh Book Council had very kindly agreed for me to display the book on their stand at very short notice and a number of copies were sold.
Posted by Ann Shaw at Monday, June 01, 2009 No comments: