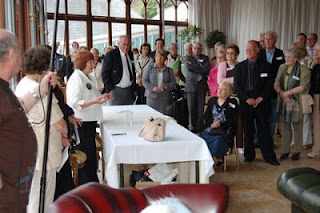 Michael Jones, son of the boilerman at Craig-y-nos, grew up under the shadow of the castle.

He contacted me recently:

I've been re-reading your book and find it even more moving and stirring of the emotions than ever.  Perhaps I was too young to know what Craigynos was all about, other than it was an


acutely infectious place, from which you kept away.

Girls on the balcony- early 1950s
The medical treatment seemed very harsh, almost cruel, but it was considered the right thing at the time.  I never knew that the children were out in the open all night with snow on the beds - it seems horrendous!   Fortunately there were a number of success stories.  . What I cannot understand is the regime at the hospital, where most of your correspondents recall deprivation, over-zealous punishment, mental and physical abuse, insufficient education, and strict curbs on visitors, akin to being institutionalized.  Yet when the lucky ones returned home they were lost, out
of step, and missed their fellow patients greatly.

The bonfire nights were very, very good.  The local children were allowed in, under strict supervision, probably on the strength of Dad, Glynne Jones, being the hospital engineer. The display was spectacular and you will probably remember the girls on the balconies calling down to us and dropping sweets.  Once a firework ignited the whole box and all the fireworks went off together!  I think Edgar Davies was quite badly hurt by this. After the show we would run down the terraces to see if we could retrieve any unexploded fireworks.

I was occasionally allowed in to the boiler room end of the hospital to see all the gleaming machinery, which Dad looked after.  Once I accidentally turned a large switch and practically all the hospital went black!

On some of my bad bouts of bronchitis, I remember Dr Williams arranging for a new treatment - injections in the bum!  Whether this was streptomycin, I don't know.”

Michael sent me another email with some more of his memories:

"My wife bought me your book after seeing The One Show.  I've started reading it and have been fascinated and, I suppose, shocked.

My father, Glynne Jones, was the Hospital Engineer from 1947 until 1960.  My mother, Margaret, worked as a nurse in Ward 4 over about the same period.  As far as I can remember (only a youngster then) they never said much about hospital life.  I certainly was never aware of the regime there, as related by your correspondents.  We lived in a hospital house, called "The Villa" from which the hospital could be clearly seen and we could just hear the sounds of children on the balconies and the chiming of that wonderful clock.

I knew of the risk of infection and to keep well away from hospital premises but, as was to be expected, the local boys would sneak into the grounds to see now near we could get without being seen, just for the excitement.  We were allowed in, officially, to see the annual Guy Fawkes bonfire and fireworks display.  This was very good but we were warned to keep well away from the wards and not to touch any of the sweets and notes dropped down to us by the young girls on the balconies above.  Other occasions when I was allowed in was to attend Sunday Mass being said for the staff who were Catholic - the nearest Catholic Church was in Ystradgynlais, 7 miles away.

I suffered from bouts of bronchitis then and I remember being taken in to be examined by Dr Williams.  There was always the worry that it might have been TB but, luckily, I was alright.  The stigma attached to TB did come home to me when, after a routine mass chest X-ray at the grammar school in Ystradgynlais in the early 1950s, a shadow was detected and I was given a letter for my parents to bring me back for a second examination.  The reaction from my classmates was immediate and no-one would sit next to me on the school bus!  I was cold-shouldered but it turned out that the X-ray had discovered for the first time that I was dextro-cardiac, something which proved of interest to doctors ever since.

I moved away to the north of England and have only just returned (2010) to live near Monmouth.  Congratulations on what you have achieved, I wish I'd known about the project before. "

Thank you Michael for your contribution.

"The Children of Craig-y-nos" by Ann Shaw and Carole Reeves available from Amazon online, price £9.99p.