Graham Canning, age 67, tells his story of the years he spent as a child in Craig-y-nos: 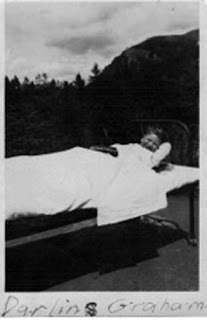 "I recently saw the BBC  "One Show" about Craig-y-Nos . I too am a past patient spending nearly five years there.

I contracted TB in the left knee, which then spread, to my right hip. “ 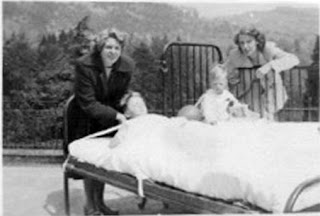 Photos show Graham not only in a plaster cast but with his hands tied to the bed too because he had worked out how to undo some of the shoulder straps tying him down.

However, after sorting out my left knee my Mother brought clothes to bring me home and was told that I had collapsed when walking and investigations discovered that the TB had spread to my right hip.  After 2 years of my parents were devastated.  The right hip was now a different matter to the left knee however.  By the time it was detected the TB had all but destroyed the hip and the doctors had to fuse/lock it.  This meant that I have very limited movement of the hip.

Also I was also left with a shorter right leg.

Many of the comments on the One Show I recognized.  My parents also could only visit once a month.  There were quite a few visitors from the Cardiff area and I recall my Father telling me that the Cardiff bus used to miss the Swansea connection to Craig-y-Nos by 5 minutes.  So my Father spoke to the Swansea bus company and they agreed to change their timetable to meet the connection.

It is perhaps worth recording the tremendous power that the doctors held then.  My parents were told that when I eventually came home I would need a lot of care and attention.  In fact so much that they should not have any more children so that they could devote all their time on me!  So I became an only child.  I don't know the name of the doctor, my Father thought her to be foreign. (This would be Dr Hubbard the Austrian-Jewish refugee). 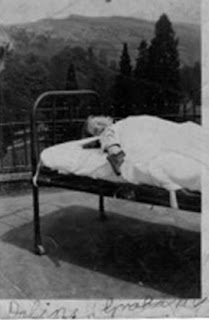 I was tied with straps to the side of the bed but because I used to strain to reach and then undo the knots they moved the straps to the rear of the bed over my shoulders and through the springs of the bed well out of my reach - and that was that! I remember the straps coming from a corset type jacket around my body.
I remember during the early stages of learning to walk clambering to the end of my bed in anticipation when I smelled the polish on the leather of the boots forming part of the calipers and hoping they were coming to me.

My Parents
My Mother never really got over my illness and the length of time I was away.  Her everlasting memory of when I first went to Craig-y-Nos was of me being carried away in a nurse's arms with me looking back over her shoulders crying with arms outstretched reaching for her.  All her life she informed others that I was in hospital for 5 years.  It left a mental scar, which remained with her all her life.

Me
With regard to contracting TB I have always considered myself lucky.  TB at that time was a killer and many died because of it.  Those that died in the main had the disease in their breathing system, in particular their lungs.  Even if they survived it was likely that breathing problems could occur later in life.  My problem was physical and was simply a case of adapting and getting on with it with little risk of problems in later life. To date that has been the case.  I've led a very active life, playing sport at a high level, in particular badminton and can do all the things, like swimming, riding a bike etc. that doctors thought not possible.  Although I was playing badminton at a high level my hip frustrated me and I sought advice from a top consultant to ask if there was any way I could change my situation eg. lengthen my right leg and replace my hip with a new one.
But he said there were no realistic options and it was a miracle that I could play sport at the level I was playing without any discomfort that I should send the surgeon who did the operation on me as a teenager a magnum of champagne. 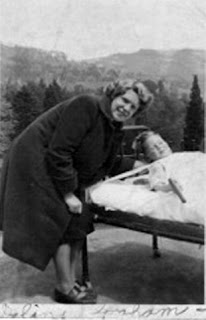 .
When I first came out of hospital my parents/family suggested I should have a wheel chair but I was having none of that. They say we are all products of our environment and upbringing and that was certainly the case for me.

All my friends were keen on sport, one a good footballer, another a good runner, another a good wrestler, etc. and children being what they are you either compete with them or you are left behind.  It was great character building and with my positive outlook on life and total disregard to my disability (eg. on school sports days I was always on the starting line for races knowing I was going to finish last!) has stood me in good stead all my life.

At 14 years of age I had a further operation in a Cardiff hospital to take a bone from my shin which was placed in my hip thus increasing the length of my leg.  But for that operation my right leg would now be two and a half inches shorter instead of the one and half it became and still is. So what has been the effect on the family?  Nevertheless I played all sports, as I grew older, playing badminton at a high league level, coaching and managing the Welsh U14, U16 & U18 Welsh national junior squads.

Finally, my coming home was a strange event.  My parents rang up one day and asked if they could look after me at home.

The Sister said she would speak to the doctor and for Mum to ring back later.  So Mum did and the hospital agreed and told Mum to come and get me, just like that!!!

Graham remembers the huge party at his house to welcome him home and people coming in and throwing money on to the bed for good luck. “The whole street was there. In those days there was a strong community spirit.”
Coming home had its problems. He wasn’t used to doors and he used to run in and out of peoples houses.” If my mother smacked me for being naughty I would say:” I am going to tell sister in you.”

The family lived in Grangemouth, Cardiff where his father worked on the docks as a tugboat skipper

As a ten-month-old baby he had Pinks disease (caused by mercury poisoning) and he is lucky to have survived it only to go down with TB of the bone 18months later.
At 9 years of age he was hospitalized again after falling off his bike where the handlebars ruptured his stomach and led to the removal of his spleen.

But despite all these early setbacks Graham was determined to make something of his life.
“ I was lucky. I was born with the right attitude to life,” and so it has proved.

Today  67 year old Graham is a retired Civil Servant and he continues to lead a very active life: he plays badminton twice a week and goes dancing (rock ‘n roll and jiving) with his wife every week in Cardiff. They have two daughters.

"The Children of Craig-y-nos" by Ann Shaw and Carole Reeves, published by the Wellcome Trust for the History of Medicine, price £9.99 is available from Amazon online.
Posted by Ann Shaw at Wednesday, July 31, 2013